When looking for portable HF antennas, you must have come across Buddipole antennas.

However, the debate on Buddipole and Buddistick antennas – the two popular variations of Buddipole’s antennas – tends to make choosing the right antenna somewhat confusing.

But before you freak out about why choosing anything in the Ham universe is so tough, let me tell you, I have done the hard work for you.

In this article, I will compare the two most popular Buddipole antennas so you can understand the differences between the two and choose what fits you best.

I have chosen the comparison factors after thorough research. So read till the end to make sure you don’t miss out on any information. 😊

When comparing Buddipole vs Buddistick antennas, Buddistick wins on many factors such as ease-of-use, setup, and stealth. So, it may be the choice for new Hams. Buddipole, on the other hand, offers better flexibility of configuration which may be better for you if you don’t mind fiddling a little.

Here’s a handy little table comparing some of the most critical factors of the two antennas, to make it easier for you to choose one:

One of the reasons why Buddipole and Buddistick are extra confusing is probably because of the company name.

Buddipole is the name of the company that manufactures the two antennas we are discussing today. And The Buddipole is also one of their first groundbreaking antennas, while The Buddistick is one of Buddipole’s own products.

Now that this confusion is (hopefully) out of the way, how do these two antennas compare? 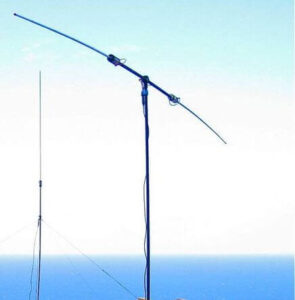 The Buddipole antenna extends up to 16 feet in length and often attracts new Hams as it offers a low-price threshold and promises a quick sneak peek into what DXing may be like. 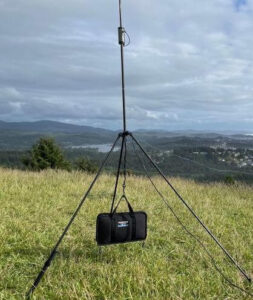 The Buddistick antenna is a vertical antenna that extends to 8 feet when in use. It is yet another multi-band antenna, but it does not go as high up the frequency ranges as a Buddipole and operates from 40m up to 6m bands.

Now that we have a quick overview of the two antennas, let’s quickly jump into the details of how these two compare with each other and which one should you choose.

Choosing between Buddipole vs Buddistick can make you want to pull your hair out. The two antennas are relatively similar. But choosing one over the other might mean a lot of difference in terms of usability, operation, and setup.

I will compare the most critical aspects of the two antennas in more detail below.

One of the first things that most Hams, especially those new to DXing consider is how easy the antenna is to set up and use.

When it comes to installing the antenna, Buddistick clearly takes the lead.

This antenna is super easy to install. All you have to do is erect the tripod stand (if you are using one), assemble the antenna, and put the two together.

Apart from the physical setup, the technical installation is not too challenging either.

You can simply connect the antenna to your radio, adjust it a bit using an antenna analyzer, tune it according to your frequency, and use it.

The Buddipole antenna, on the other hand, is a lot more challenging to set up initially. This antenna does not exactly plug and play, unlike the Buddistick.

The Buddipole can take a lot of time to set up, and once the physical setup is complete, you are faced with the taxing task of technical setup.

The technical setup of a Buddipole antenna can be on a whole new level of complexity.

Some hams never manage to establish any contacts with a Buddipole due to how difficult it can be to set up.

The antenna is fiddly, which means you will have to mess with it a lot before it can work properly.

On top of all that, the numerous configurations it offers also add to the setup difficulty. There’s a lot of guesswork involved when selecting the right configuration, which definitely increases the time it takes to get you on air.

Some Hams have also reported having difficulty while trying to switch bands on the antenna, as this may require more fiddling around, adjusting configuration, and re-tuning the antenna.

When it comes to HF antennas, there’s always a tradeoff between portability and efficiency. It would be unrealistic to expect antennas as small as Buddipoles and Buddisticks to work as nicely as full-sized antennas do.

But both antennas perform well for their price and size.

The Buddistick, however, appears to take a slight edge over its dipole counterpart. It is reported to perform well during bad weather and band conditions.

Moreover, the fact that it can quickly get you on air, without asking you to fiddle around, also gives the Buddistick some performance points.

Portability is in the DNA of all Buddipole antennas. This is why it is another factor where both antennas finish almost neck-to-neck.

Buddistick antenna is also more compact when packed as compared to the Buddipole as its collapsed length is 13 inches as opposed to Buddipole’s 22 inches.

Both of these antennas come in nifty little bags, which make them easier to carry around and take with you on hikes, camping trips, or to the beach.

Stealth might be an important factor, especially for people looking for apartment antennas.

You may want to enjoy DXing from your apartment shack, and while putting a massive HF antenna may be totally out of question, smaller antennas too could get you in trouble with the HOA.

But once again, Buddistick takes the lead.

The Buddipole antenna, when in dipole configuration extends 16 feet from side to side. Therefore, not only is it more visible, it can also be impossible to fit into small balconies.

Buddistick, being a vertical antenna, extends like a thin wire above the ground, hence it is pretty stealthy. Moreover, it happens to be shorter in length as compared to the Buddipole. This factor also gives it an edge over it in terms of stealth.

The flexibility of configuration is one area where Buddipole seems to take the lead.

Buddipole antennas can be set up in multiple configurations, and this is what gives them great flexibility and a slight edge above Buddisticks in this regard.

What makes it more interesting is that one of the configurations of Buddipole antennas is vertical, which means this antenna can double as a vertical antenna and can act as a rather long Buddistick.

Of course, you may need some additional accessories to try various Buddipole configurations, and that might add to the price. But if you can compromise on stealth and you don’t mind the extra work that goes into its setup, Buddipole might make for a good choice.

Ham operators never seem to agree on anything. And the same is true for the Buddipole vs Buddistick debate. When searching online, you may find an almost cult-like following for both types of antennas, with some people rooting for Buddipole, almost aggressively, and others campaigning for the Buddistick.

This makes choosing the right one even more difficult.

I have done my due diligence and have compared some of the most prominent factors of the two antennas, with complete impartiality.

Despite both antennas being almost similar in terms of performance, Buddistick definitely fares better when it comes to ease of setup, use, and stealth.

However, if you are looking for an antenna that can do it all, and you have the mental capacity to deal with setup complexities, Buddistick