Ham radio, or amateur radio, is a popular hobby that’s been around for over 100 years. in this article we will explain how ham radio works and the equipment required, for a beginner.

Amateur radios are used to transmit voice and data signals long distances. The term “ham” comes from the slang word for an amateur operator of wireless telegraphy. 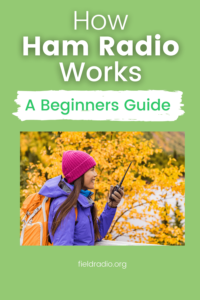 Ham radio is a great hobby for those who like to tinker and experiment with technology. It also offers the opportunity to help serve as an important resource during emergencies or disasters, when other communication systems might not be working. This guide will walk you through everything you need to know about getting started in ham radio!

If it’s your first time hearing the term, ham radio is a hobby where people use special radios and antennas to communicate with other amateur radio operators around the world. It’s similar to CB or FRS walkie-talkies that you might mount in your car for extra safety when driving long distances. Ham radio even has its own emergency signal: “CQD” (meaning “All stations, distress”).

The basics of how ham radio works

Ham radio is a popular term for amateur radio. It can be used to transmit on any frequency within the amateur spectrum. A ham radio operator uses a transmitter and receiver that are capable of transmitting and receiving on any frequency.

The spectrum can be broken down into three main categories, each with a different use case.

This guide below will help you understand what gear you need to get started with ham radio as well as the frequencies that are used.

To get started in ham radio, you will need 3 things:

The “transceiver” is the combination of a transmitter (to send out your signal) and receiver (which receives signals). It is a good idea to start with a basic ham radio transceiver that will work on all of the most popular HF bands.

If you are only interested in talking to people locally, then you can get by with an FM or VHF/UHF-based system. A local two-meter “simplex” network exists where hams talk without any need for repeater systems.

Ham radio clubs in your area can help you connect with other local hams or get started on VHF/UHF packet networks where you will be able to send messages back and forth using an FM voice signal.

If you are more interested in communicating around the world, then a HF transceiver is what you need.

Above the VHF/UHF bands, ham radio operators can communicate with other people on a worldwide network of Amateur Radio satellites in orbit around Earth. You will need an HF transceiver to talk with these systems and you may even be able to build your own satellite station from scratch.

It’s important to note that you don’t have to spend big money on ham equipment when starting in the hobby. You can find cheap handheld radios and antennas at places like Amazon or eBay but do keep in mind, these are not always legal to use in all areas.

There are several different types of antennas that you can use for ham radio. When choosing an antenna, it is important to keep in mind the frequency range that your radio operates on or will operate on soon!

If you want to get started with VHF/UHF FM voice communication then a simple rubber ducky (a small handheld antenna) will work fine. You can also get a mobile whip antenna for your car or truck to take advantage of the local FM repeater network operating on VHF/UHF frequencies across the country.

A more complex option is an outdoor base station antenna, which consists of several elements that are typically mounted high in the air above your home.

The power supply is simply a battery that plugs into your equipment and provides the necessary voltage to make everything work. You can use all sorts of different types of batteries depending on what you are powering with ham radio, from car batteries to solar panels!

A popular option for VHF/UHF radios is an external rechargeable Li-ion pack which you can plug directly into your radio.

You will find that with ham radio, you don’t need to spend big bucks on expensive equipment to get started and communicate around the world! Even an inexpensive handheld VHF/UHF transceiver is enough if all you want to do is talk locally or use a repeater system.

A good HF radio and antenna however will set you back a few thousand dollars!

Hams may also utilize different transmitting modes that alter how their signal will be transmitted and received by other hams, which include:

Hams may find different transmitting modes useful in different situations.  For example, SSB is generally used for long-distance communications while CW and AM are usually only utilized in emergencies or when there’s simply no other option available.

To operate a ham radio, you will need a license from the Federal Communications Commission (FCC). There are three exams you must pass:

The entry-level test is called “Technician” and allows for limited privileges on frequencies below 30 megahertz as well as some modes including voice and Morse code.

The “Extra” or highest level of license is available to anyone who has passed the previous two exams. This allows even more frequencies and operating modes including FM, repeaters, satellite communication, and other advanced techniques.

How to get started in ham radio without equipment

If you really want to get started in ham radio but don’t have any equipment, there is a way! You can set up an account with a local amateur radio club and go on one of their weekly nets for free where they will help you learn the ropes and answer all your questions.

Just listening to ham radio can be done very easily on your computer. There are several free software programs you can download that allow you to listen in real-time as other hams communicate with each other around the world, even if they are using different modes or frequencies than what your equipment is set up for!

Or if you’re just looking for some fun ham radio stuff to do, you can go on eBay and buy one of the older radios that are very popular among ham radio operators.

You will find these used radios in great condition for a fraction of their original retail price!

And if you want to get started with something more complex than what your handheld VHF/UHF radio or rubber ducky antenna can handle, you will have to start saving up those pennies!

Once you have all the basic equipment, you should learn about how it works by taking your radio to an open field or park during good weather and getting some practice transmitting with other hams.

If someone hears your signal but isn’t able to talk directly with you, they might be able to relay your message by contacting another ham who can then talk directly to you.

This is an essential skill for any ham radio enthusiast and it’s a lot of fun too!