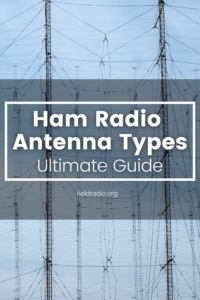 The antenna is the most important piece of equipment for any ham radio enthusiast.

If you are new to Ham Radio, it can be confusing trying to figure out what type of antenna will work best for your needs.

There are many options available, so this article will help guide you through the types of antennas that are out there.

What is a ham radio antenna?

There are many types of Antenna, so the first thing to learn about is what they are and what each is best used for.

How do antennas work?

An antenna is a conductor that creates an electromagnetic field in free space by either being fed with radio frequency energy or being energized by proximity to a high voltage source.

This electromagnetic field captures waves emanating from transmitters and transmits them as radio signals.

How to choose a ham antenna

Many hams are looking for ways to improve the performance of their antenna systems. It is important to understand what an antenna is, how it works, and what you are trying to accomplish before you select the right antenna for your unique needs.

Understanding these factors can help you choose the right kind of antenna for your particular application. This article will explain the various types of Antenna which will help you to decide on the right type for you.

This is an antenna designed for use on a single ham band only. For example, an antenna that can operate on 20 meters.

Ham antennas are tuned to the ham band they are designed for. The ham band frequencies are given in terms of MHz (megahertz).

These antennas may work on other ham bands but signal strength and ham band coverage will not be comparable.

Dual-band ham radio antennas can send and receive ham radio signals on both VHF and UHF ham bands. They typically perform better than single-band ham antennas, but they do cost more money.

A Rubber Duck antenna is the one you get with your ham radio. It’s simple and it does its job fine. They get their name from the rubber part that attaches to your ham radio.

They do create a lot of noise on ham radios, which means they won’t be good for contact with other ham radio users. The range depends on where you are if there are no obstructions such as buildings or mountains etc.

They are easy to build, just cut a section of wire and attach it to your ham radio with crocodile clips.

They have more noise on ham radios than rubber duck antennas but they do have better range. Rabbit ear antennas are typically omnidirectional, which means they receive and send signals equally in all directions.

The most common ham radio antennas are the dipole. They are suitable for ham radio satellite work as well as any ham radio station. A very popular and portable dipole Antenna is the Buddipole.

The dipole ham radio can be easily mounted on struts or on a support to get it up off the ground.

A dipole ham radio antenna consists of two pieces of wire that are stretched out in opposite directions and then they are brought back together at a center point, where the ham radio is attached with crocodile clips.

The wires will most likely be stranded, which means you will need to connect them with a soldering iron. Make sure the ham radio is safe for you to solder, check its ham radio manual for this information.

A ham radio Parallel Dipole is similar to the ham radio dipole, only instead of being two separate ham radio wires, they are both one piece of wire.

The ham radio Parallel Dipole is usually made with a stiff ham radio wire, which means it won’t be as easy to mount.

Trap Dipole Antennas are mostly used in ham radio repeater systems. It consists of ham radio traps and coils and it can be adjusted to various ham radio frequencies by changing the length of the ham radio wire.

A Yagi ham antenna is a directional antenna that has multiple elements arranged in front of it for optimal ham radio transmission and reception. The antenna also has a backfire to stop noise from ham radios getting into the signal path coming from it.

This is a directional ham radio antenna that is typically used in ham radio satellite work and ham radio repeater systems.

There are many different types of antennas, so it is important to know the purpose of each type (you can even convert an old CB antenna for use with amateur radio). We hope that this guide has been helpful and you have learned a little more about ham radio antennas for your own ham radio use.