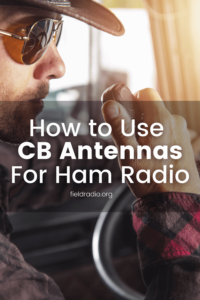 In this post, we’ll talk about CB antennas. Specifically, how you can use a CB antenna for ham radio communication.

CB stands for “Citizens Band” and is a type of short-distance two-way radio that was first introduced in 1945.

The Citizens Band has been around since the 1940s but there are still many people who do not know how to properly use it.

In this post, I will teach you everything you need to know about CB antennas so that you can be better informed on what they are and how they work.

What is a CB antenna?

A CB antenna is a type of short-range, two-way radio that operates in the citizen’s band. It’s called an “antenna” because it consists of both transmitting and receiving devices which together form what we call an “antenna system”.

CB antennas are typically mounted on top of your vehicle so you can transmit and receive signals to other CB radio users in your area. You can also use CB antennas to communicate with radios over short distances such as on a boat or camping trip where you don’t have access to cellular service and/or wifi internet.

Most CB antennas are vertically polarized which means that their waves move up-and-down, not side-to-side.

This CB antenna has a female CB radio connector at the bottom which plugs into your CB radio, and an attached magnet mount that adheres to metal surfaces like car rooftops or boat hulls.

What is the difference between CB and ham radio antennas?

CB antennas are designed for CB radio communication, which is usually in the frquency range 26 MHz or 27 MHz. Where as ham radio antennas have a frequency range from about one MHz to 50 GHz.

Ham radio antennas are designed for communicating over much longer ranges, with higher power levels. They are also catered toward receiving weaker signals which is possible due to the greater frequency range and lower noise floor on ham radio equipment.

There is there is no difference in cabling or connectors between these two types of antennas.

CB antennas come with a higher power rating than ham antennas as CB radios are usually capable of higher power output. This means CB antennas must be grounded properly to prevent any damage to the vehicle and nearby structures due to electric shock, lightning strikes, or cabling issues.

How to use a CB antenna for ham radio?

Although CB antennas are designed to work at a different frequency to what ham radios operate on. A CB antenna can be used for ham radio by simply trimming the antenna down.

As CB antennas are designed for frequencies around 27 MHz, the best one can do is trim the length in order to operate at or near ten meters in wavelength (about 28 MHz), 6 meters, or lengthen it to go to the 12 meters wavelength.

How to convert a CB antenna for other wavelengths?

If you want to use a CB antenna on other wavelengths (i.e. for ham radio), several things need to be done.

CB radio antennas are not designed to be used for ham radio communication by default.  But, it is possible to use a CB antenna in conjunction with other wavelengths by converting the coaxial cable and adding an adapter or amplifier to compensate for impedance mismatch.

The hardest part of this process can be finding out what type of connector you need that will work with your specific equipment.

Once you know this information, though, there should be no problem making the conversion!