When you hear the phrase “Ham radio operator,” you instantly think of a man, most likely an older man, with a radio.

And that’s only fair.

You go to Ham conventions. There are men.

You go on air. Men are chatting away.

You log on to YouTube to learn more about Ham radio, and most top-ranking videos feature male Hams.

This begs the question, are there any female Ham operators at all?

In this article, I’ll answer that and more.

Stick around till the end as we talk about the participation of women in Amateur radio, some famous female Hams, and more.

Are there any Female Ham Operators Genuinely Interested in Ham Radio?

In short yes, many women are interested in Amateur radio as a hobby. Some have already acquired their licenses, becoming female Ham operators, while others aspire to join their ranks soon.

Ham radio offers unique challenges and an opportunity to learn and connect with other like-minded people on air. Apart from that, it also prepares you for effective emergency communications.

Women know that. And most of them want to enjoy and benefit from all that Amateur radio offers.

The female representation in the Ham radio community, however, is low.

I’ll talk about that in the next section.

Percentage of Women to Men in Ham Radio 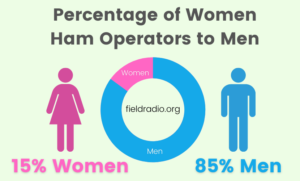 According to ARRL’s website, women represent only 15% of the US ham radio operators’ population.

That’s embarrassingly low, especially since we are living in the 21st century and have achieved some milestones of equality in several other fields.

This low representation is abundantly clear in Ham radio meetups, whether they take place on the ground or on air.

And the small representation is what becomes one of the barriers for more women who want to join the hobby.

According to some stats, the average ARRL member or Ham radio operator in the US is a 68-year-old white male.

For people looking from the outside, and even for women who have been on the “inside,” this paints a grim picture. It reflects the general notion that Ham radio is primarily occupied by baby boomers and older men.

The idea of connecting and chatting with a 60-year-old Ham would be less appealing to a female ham operator. She would naturally have more in common with, and hence would be more interested in talking to people her own age.

While the tide has started to shift, we still have a long way before we could have more young people and female representation.

But that’s not the only reason why there are so few female Ham operators.

What comes next may sound harsh, but it is the reality.

While most Ham radio operators are instrumental and support women 100% to join the hobby, you cannot deny that certain Hams have made it impossible for female Ham operators to feel welcome.

The menace of gender bias has not spared the hobby as some women claim they have to go the extra mile to prove their amateur capabilities.

Of course, those are some terrible experiences women have had. But one black sheep is enough to incriminate the entire herd, right? That’s what is happening to Ham radio.

But, while some areas of the hobby need work, some women have still made a mark in this male-dominated hobby and continue to lighten up paths for future female Amateurs to follow.

I’ll talk about them next.

It would be almost unfair to talk about female Ham operators and not mention these extraordinary ladies who have been in the hobby for years and have essentially paved the way for future young ladies to come in and eliminate the gender imbalance.

Here are four of the famous female ham operators who deserve acknowledgment and appreciation: 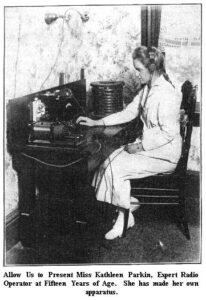 Gladys, born in 1900, became interested in wireless telegraphy when she was five. Later on, she operated an amateur station from her home for six years, which according to some sources, was the first amateur station in California, where Gladys lived.

Later on, she obtained her first-class commercial radio license in 1916 when she was fifteen and became the youngest female recipient of a radio license at that time.

What she did for the amateur women community by existing in the male-dominated hobby, that too in the early 1900s, can be regarded as an immense contribution for future female ham operators. 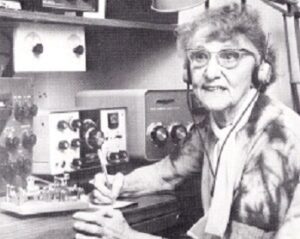 Clara Reger, W2RUF – W8KYR, was born in 1898 and got her first license in 1933. She coined the famous “33” salutation that is still used and honored by Amateur ladies.

Clara received the Outstanding Ham in NYS award in 1961, most likely due to her participation in the hobby.

Though not with us anymore, Clara Reger is, to this day, honored and cherished as one of the leaders of women in Amateur radio.

Denice Stoops, KI6BBR, is among those female Ham operators that are living the legacy. After becoming the first female commercially licensed telegrapher at an American privately owned station post-WWII, she acquired her Amateur radio membership.

But this was not the only one of her “radio firsts.”

Her local Ham club invited her to their Board of Directors, and soon, she became the first female president of the club in its 65 years of history.

Denice supported and encouraged many women to join the hobby, wrote columns in a newsletter dedicated to female ham operators, and endeavored to inspire women to continue their involvement in Amateur radio.

Valerie Hotzfeld, NV9L, got licensed in 2006 and has been very active in her local ham radio clubs. She is the co-host of Ham Nation, a popular Amateur Radio show. Val, as she is known in the community, has created several helpful videos for the Ham radio community that reflect her expertise and dedication to the hobby.

Val also won the Amateur of the Year award in 2018, a significant achievement for all women in Ham radio.

Kay Craigie, N3KN, the powerhouse of a female ham operator, extensively served the Amateur hobby. She became ARRL’s president back in 2010 and maintained her position for three terms, celebrating the league’s centennial year and representing the community in many international conventions and gatherings.

Of course, this is not an exhaustive list of inspiring female Ham operators. Every woman who goes out of her way battles the stigma and makes her way into the hobby is inspiring and deserves immense appreciation.

Now, let’s talk about where it all began.

The History of Women in Ham Radio

You would think women only became part of the hobby since the move for equality caught fire. However, women have held their place in a hobby as male-dominated as Ham radio since the start of the 20th century.

They have been known to well and truly push boundaries in the community since 1910.

These resilient women of the early and mid 20th century laid the groundwork for the future female Ham operators to enter the hobby and make a mark. And the fact that they did it back when gender biases and inequality were touching peaks makes their effort all the more appreciable.

When women support women, good things can happen. And that’s why there are many groups and nets dedicated to the women of Ham radio where they can connect with other female ham operators, build friendships, and grow together.

Here’s a list of some of the popular online platforms for female Ham operators:

Female Ham operators are called ‘Young Ladies’ in the hobby. Many women find this title condescending. But discussing whether it is right or wrong is a topic for another day.

“Young Ladies” of Ham radio have their own league, like the ARRL, called the Young Ladies Radio League or YLRL.

The YLRL was found way back in 1939, and while none of its “founding mothers” is here today, it thrives on many female Ham operators joining the community.

YLRL exists to encourage and assist women in joining the hobby and even offers scholarships to deserving candidates.

You can join the YLRL by visiting their website. They would be happy to see more women reaching out and joining.

Apart from the general ladies’ group, female Ham operators also have a private Facebook group where women Amateurs get together, discuss various aspects of the hobby, ask questions, and connect.

The group, as you would assume, is women-only, and no men are allowed inside.

This is yet another helpful group for female Ham operators where you can find and connect with the women of the hobby. This group is an open group so that anyone can join.

Apart from dedicated online groups, women of Amateur radio also meet on-air and have various nets dedicated for themselves.

You can find a complete schedule of all YL Ham nets on YLRL’s website.

But we still have a long way to go and many changes to make before this dream can become a reality.

Fortunately, some of these change-makers are already in place as most male Ham radio operators are trying their best to make the hobby more welcoming for their female peers. And we can see the results manifest in the form of powerful women like Kay Craigie taking important positions in the community.

But that doesn’t mean there aren’t any problems facing female Ham operators.

We need to acknowledge these issues, eliminate them, and foster an environment that encourages more women to join.