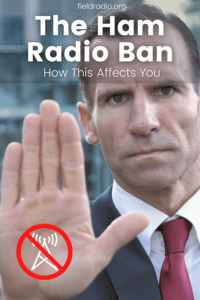 For those of you that don’t know, the Federal Communications Commission (FCC) is considering a proposal by government officials to ban ham radio.

Ham radio operators are the only remaining people in America with access to free and unmonitored communication channels.

This means that if this proposal goes through, we’ll be left with nothing but telephone lines and cell providers who can charge us for every word spoken or text we send.

Why does the government want to ban ham radio?

The proposal, which comes as part of a government drive for spectrum efficiency, would see ham operators forced off their frequencies between 420 and 450 MHz to make way for “public safety”.

Many ham radio operators are also preppers and survivalists, who can use ham radios for communication when all other means of communication go down (i.e., in case of a natural disaster). So it’s within the public interest to keep ham radio available, for safety and peace of mind.

The official story regarding the proposal is about ham radio interference, but many people believe the reality is that ham operators are a threat to government officials because of their ability to communicate without being monitored.

What would this ban mean for the future of amateur radio enthusiasts?

If the “ham-ban” proposal is passed, ham radio operators will lose their rights to be on certain frequencies that have been legal for decades. In an age where more and more people are being disconnected from society because of social media addiction, ham radios offer a way for people to connect, without the concerns of being monitored.

This would leave everybody at the mercy of telephone phone providers and the need to wade through all of the distractions present in today’s technological environment.

How can you help stop this from happening?

Ham radio enthusiasts must speak out against this proposal and let their voices be heard before it’s too late.

You can take action now by contacting your local government officials and letting them know how ham radio has helped you connect with friends, family members, and even strangers who share similar interests to you.

Ham radio is an important part of many people’s lives and we deserve to keep our frequencies.

What else could be done to make amateur radios safer for use in densely populated areas?

With the increasing population and more congested airwaves with frequencies being taken up by TV stations wireless microphones, cell phones towers, etc… ham operators should instead be given priority on their own frequencies because they provide a vital service to the public at large.

One proposal ham operators are suggesting is to make the frequencies we use different from those used by other devices, like cell phones. If ham radio frequencies were separated enough that they don’t interfere with these other types of communication, there wouldn’t be a need for a ban.

The good news is there are other ways ham operators can stay connected without using a cell phone or landline connection.

One way is to use a hotspot from your smartphone and connect it with an amplifier, which will help you reach longer distances without getting static interference from the device itself.

Another solution for those that have limited budgets is investing in satellite phones. It’s not as ideal because of the cost, but ham radios are still a great option for those that want to stay connected without depending on a cell phone or landline provider.

In just one month, there were over 300 million text messages sent in America alone. This means that many people rely on cell phone communication for their everyday lives, but this also leaves them vulnerable to being cut off from friends and family if a disaster ever strikes.

With so much reliance on cell phones these days, it’s easy to forget about or dismiss amateur radio as an outdated technology or hobbyist pastime. But it also provides an essential alternative means of communication if the standard methods become unavailable, so we believe it shouldn’t be banned.