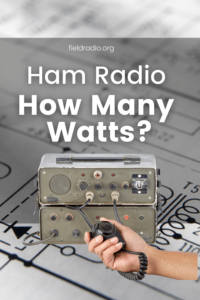 One question commonly asked by ham radio enthusiasts is “How much wattage do I need to run my ham radio?”, There’s no hard and fast rule on what power you’ll need for your specific setup, but there are some guidelines we can give you based on how large your antenna is.

To figure out what kind of power output you’ll need, first assess the size of the antenna you have.

In this article I will explain the different factors and considerations to take into account when calculating this.

A good rule of thumb to work out how many watts a ham radio will use is:

So the short answer to this question is: “It depends.” There are too many variables such as the efficiency of your radio, type of antenna, and the height of your antenna to give a hard rule.

The bottom line is that watts are watts. There is no significant advantage to having more power output if you’re using it all up on the antenna itself.

If watts are watts, what’s the difference between 100 watts and 1,000 watts? It’s not about how far you can communicate; it’s about how much power your radio uses when sending and receiving.

For ham radios, the watts-per-dollar metric is pretty constant because power output does not vary by much. You might see some small fluctuations about this value that would not be significant enough to change the watts per dollar.

The watts transmitted by the radio are actually the combination of watts radiated and watts lost in the transmission line.

A better way to determine if you have enough power is to calculate watts radiated, which is watts input minus watts lost in the transmission lines. The formula for watts radiated Pout = Pin – Ploss.

In watts, Pin is the power input to the antenna and Ploss is the power lost in watts that accounts for line loss, connectors, balun etc.

Next step is to calculate your watts radiated from your antennas efficiency factor (eff) and your line losses from 5 to 30 MHz. To do this you need a formula for watts radiated:

eff = Pin – Ploss (Pin is the power input in watts to the antenna and Ploss is watts loss).

So, for example: 3500 watts at the antenna has an eff of 0.9 based on watts radiated of 3035 watts and a loss of 65 watts. In other words, only 90% of the input power actually makes it to your antenna while 10% is lost in transmission line and connectors.

While eff is a good indicator for what kind of watts you will need, an even better indication would be a plot or graph of watts radiated vs watts input for a given antenna.

If you have a graph or plot of watts radiated vs watts input versus angle from the horizon at each frequency in your ham band then you will have a much better idea what kind of watts input range to use, and can then run that through eff calculation formulas.

In other words, watts input to watts radiated at a given angle from the horizon.

It’s important to know that the higher your antenna is mounted and up in the clear, then more watts will be radiated for a specific watts input. In other words, you can get away with using less watts if your antenna is high above ground level (HAGL).

Above all else, watts is watts. You can use watts input to watts output watts loss for antennas that are mounted HAGL or watts radiated eff for line losses based on height above ground level.

Systems using 100 watts will get the job done efficiently even when watts output is reduced by line loss. But you cannot run a radio with watts output greater than watts input for a given antenna without getting into the negative watts.

And watts input watts output eff = watts radiated or watts loss in line and connectors depending on height above ground level of your antennas mounting point.

It is important to have a good understanding of the power requirements for your radio or antenna system. You should be able to determine if you have enough power from a ham radio by calculating how many watts are transmitted and comparing that number with the required wattage needed.

Calculating watts can also help you determine what kind of amplifier might work best in order to get more range out of your signal, so it’s worth taking the time to go over these formulas carefully.